Pike fishing got under way this month with good numbers of Pike being caught at Ware using the Drop shotting method with Lobworms, Fields Weir produced some good pike which fell for dead baits largest 15lb, Lots of small Pike were caught right along the fishery mainly on lures.

Large numbers of Roach, Perch and Bleak were shoaling up above Dobbs Weir Lock along with the odd good Chub and Trout with anglers making the most of it and catching some big bags mainly on the red maggot,

At the very upper limit of the fishery on the Folly Island in Hertford one lucky angler banked a stunning 13lb Barbel which fell for a piece of Luncheon meat.

Good bags of Roach have been caught along the Conkers at Broxbourne also on the picnic site at Dobbs Weir opposite the caravan and camping site mainly on Bread punch.

September has always been a good month for Roach along the Towpath Fishery. Anglers fishing above Carthagena Lock were rewarded with some good bags of Roach. One angler managed to bag over 20lb of Roach with some of them weighing in at over a pound all caught on bread punch or red Maggot.

Dobbs Weir produced 2 Barbel, one at 2lb and one at 12lb, both caught from the fast water on Halibut Pellet. Chub are also coming from Dobbs Weir up to 4lb.

A club match was fished along the Conkers and the Meadows sections at Broxbourne this month, 14 anglers fished and all weighed in. 1st place was 15lb 3oz, 2nd was 13lb 15oz and 3rd was 11lb 14oz. Most of the anglers managed around 7lb to 8lb of fish which consisted of Roach and Perch. Some of the fish caught included Perch to 3lb 3oz, a Common Carp at 4lb and chub to 5lb 12oz. Most anglers fished the pole using red Maggot or Worm.

Bream are being caught down stream of the A414 road bridge. One angler bagged 7 in a session using the Waggler and fishing red maggot, other anglers are fishing the feeder with maggot and having sucsses.

Carp are being caught between Ware and Stanstead Abbotts with the biggest a nice Common caught above Hardmead Lock weighing in at 24lb.

One lucky angler fishing for Perch had a fantastic afternoons fishing along the Stanstead Abbotts section of the Towpath Fishery banking a total of 7 fish ranging from 2lb 4oz  to 2lb 11oz all caught on lures.

The picnic area behind Dobbs Weir is producing some nice fish including Tench weighing up to 4lb also Chub to 2lb and plenty of small Roach and Gudgeon.

Please be mindful that there are bridge repairs going on at Dobbs weir but fishing is still accessible.

Bulletin 20
As another season gets under way on the Towpath Fishery plenty of anglers are on the bank and catching fish. The price of tickets remain unchanged and are available from the uthorised bailiff on the bank.

Anglers fishing Dobbs Weir have been rewarded with some nice fish which included a Tench of 3lb, plenty of Bream which were caught on the feeder using maggots and a fantastic Chub which fell for a lure and weighed in at 6lb.

Some nice Perch have been caught at Stanstead Abbotts on lures, The biggest going 2lb 14oz, also on lures Pike the biggest reported was15lb.

Lots of Chublets are to be found along the section below Dobbs Weir Lock along with the  Roach.

Large shoals of Bream have been seen along the section below the A414 road bridge heading down to October Hole.

Carp in large numbers are being seen above Hardmead Lock and can be caught of the surface this time of year.

An inter schools match was held along the Navigation by Dobbs Weir café with around 25 anglers takeing part. All anglers weighed in and the top weight was 1lb 14oz.

Photo's for the Hunsdon Lock to Eastwick section of the river have been added to the Gallery Section and additional Photo's for Tumbling Bay, the Old Lea and the River Lea

Ware Angling Club as from 1st June 2015 are in partnership with Verulam AC in sharing the Lysander lake on the complex.

This is the 28 peg match lake on the Lysander Park fisheries complex..
The lake holds good numbers of carp to over 15lb with 4-5lb being typical. There are also a number of very big bream to over 9lb, some colourful golden ide plus the usual roach, rudd and perch.
It is known as a match type lake but is recognised as a good general fishery.

Ware Angling Club Fishery Rules apply (See Handbook)
Members are only allowed to fish with one rod. NO keepnets are allowed except in authorised matches.
NO night fishing

The River Lea and its tributaries - the Mimram, Beane, Ash, Rib, Quin and Stort - drain over 1000 km2 of south-east England. These rivers include rare and precious chalk streams, canals and navigations, and urban watercourses. To find out more about the rivers, the catchment partnerships, and to view the catchment plans, please navigate to their website using the link below

Bulletin 19
Febuary was a good month for Chub along the Towpath Fishery with catches coming from most stretches. The Conkers section at Broxbourne saw the most Chub caught with one angler banking 6 fish in a session which included 2 fish at 5lb7oz and the biggest going 6lb12oz, all caught on the Wag and Mag method. Anglers fishing Dobbs Weir opted to fish the tip using Bread and managed to catch Chub to 5lb2oz along with Trout, Chub were also coming out on the tip just below Dobbs Weir Lock.

The Mill Pool at Broxbourne has been fishing well for Pike this month with one angler stopping for a short 2hour session and banking 3 fish of 9lb, 10lb 4oz and 12lb all on Smelt.  Dobbs Weir also produced a nice 12lb Pike which fell for a piece of Lamprey.

Anglers fishing for Carp this month have done well with fish coming from Ware and Dobbs Weir, 2 fully scaled mirrors were caught just above Ware Lock on a white popup Boilie weighing in at 7lb and 13lb and in Dobbs Weir after a bit of a battle a fantastic 20lb 4oz Common Carp was landed.

Bream have been hard to find this month but one lucky angler managed to locate them about 100 yards below the A414 bridge at Stanstead Abbotts, he managed to catch 5 Bream with the biggest going 5lb all caught fishing the float and using Bread.

Perch have been very elusive this month but those angler fishing for them have been rewarded with some nice Perch, Ware town centre was a good venue with Perch to 3lb+ coming out.

With the river fishing season coming to an end next month time is short so grab your fishing gear hit the banks and try and catch that PB.

January is traditionally a slow month on the Towpath Fishery last year it was the rain but now with the cold weather and fish shoaling up tight in places, fishing becomes difficult.  Anglers that have braved the cold have been rewarded with some good catches.

Trout have featured a lot this month with many being caught on Lures and dead baits from the Dobbs Weir area and above Stanstead Abbotts Lock.

Some nice Chub have been caught this month on the conkers stretch at Broxbourne using the Wag and Mag technique, also anglers targeting Carp fishing with Boilies have caught Chub, one angler above Stanstead Lock landed one of  5lb Chub on a single white Popup Boilie.

An angler fishing for Carp above Ware Lock was rewarded with a nice 10lb Ghost Carp this month using a single pink Popup.

Large Perch have been hard to find this month but one lucky angler was rewarded with a nice 3lb fish caught at first light along the Ware town centre stretch.

Roach are still plentiful in the Mill Pool at Broxbourne  fishing with Maggot or Bread Punch.

Come and help brighten up Stanstead Lock with a litter pick and trim of the vegetation to brush off the winter cobwebs, see details below.... 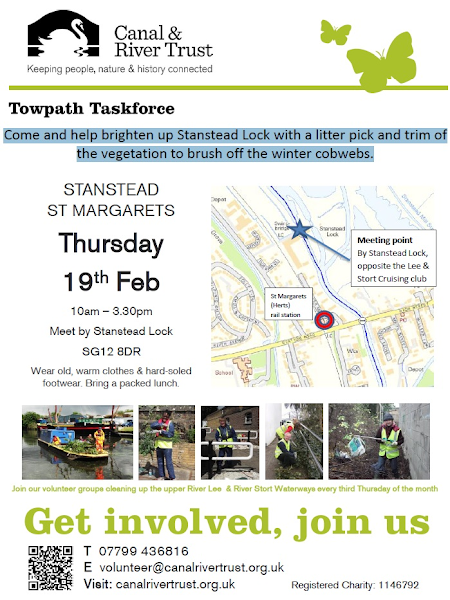 we hope that 2015 will be filled with happiness,  good health and plenty of good captures!

A happy New Year to all of the Club Members, Website and Facebook visitors from Ware Angling Club

Bulletin 17
As we moved into December the weather started to get a lot colder and the fish started to shoal up and became hard to find particularly, Roach. One of the best places to find large shoals of Roach is at Broxbourne’s Old Mill Pool where anglers throughout December managed to bag some good numbers on the pole fishing Bread Punch, Maggot or Casters. Roach can also be found on the Navigation by the Dobbs Weir Café.

The Conkers strech at Broxbourne produced some good Chub this month with one angler bagging 5 Chub upto 4lb fishing Bread Flake on the tip.

Trout featured heavily this month in and around the Dobbs Weir area with anglers catching them on lures and also Bread.

Pike were making apperances along the Towpath Fishery this month with a nice 13lb fish coming from the Old Mill Pool at Broxbourne and another 13lb fish from above Stanstead Abbotts Lock on a lure.

Anglers fishing along the Ware town streach of the Navightion were catching some nice Perch on lures as the light was fading biggest, around 3lb.

Carp are being caught along the stretch between Hertford and Ware up to 20lb,
One angler whilst fishing for the Carp landed a suprize Chub weighing in at 6lb10oz caught on a boilie.

HAPPY NEW YEAR TO ALL AND GOOD FISHING